Born in western Australia, author Chris Allen went on to join the Australian Army and become an elite paratrooper.  It was no doubt these experiences along with the three different law enforcement agencies which gave him the tools to build such great thrillers.  Both his books, Defender and Hunter have climbed up the charts on Amazon and made him one of the hottest new thriller authors out there.  He was kind enough to spend a few minutes to discuss his career and his thoughts on the future of publishing. 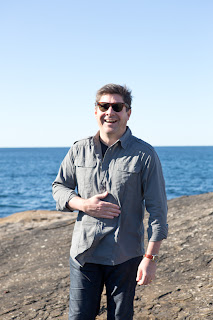 1- With all of your military training and law enforcement skills, are there scenes or themes in your thrillers which are a direct result of your experiences?


Sure are. There will be the occasional specific scene in the stories, for instance there’s a parachute scene in Defender that immediately comes to mind, but mostly there will be themes throughout the books that I draw on directly from my experience to create in the stories. In fact, the whole point of Intrepid is based on my views about having a more international focus and increased collaboration to bring nations together. We tend to focus a lot in popular culture on what individual countries and their agencies are doing – CIA, MI6, the Mossad and so on. I’m a bit tired of that and wanted something new!
In addition to scenes and themes, I draw on different aspects of my personal experience to create Alex Morgan’s attitudes and outlook on life and to an equal extent on the patriarch of Intrepid, General Davenport. There are many habits and idiosyncrasies and points of view within Davenport that are directly mine. But it is up to the reader to decode those characters as they wish.


2- You have obvious writing chops.  Where did you develop your talent for writing with such a strong command of using all the senses?
I’ve never actually undertaken a writing course. I tend to write the way I speak and I’ve been told that I have a very experiential tendency in the way that I tell stories. So as things occur to me, they appear on the page. Reading back over my work, I try to focus on keeping pace and ensuring the interest level of the reader is maintained. I also try to bring out the characters experiences as they are occurring in real time as much as possible – in all the scenes, but especially keeping the action scenes realistic. That said, it took ten years to pen the various iterations and self-publish my first book, Defender, and six months to get through Hunter on deadline with a publisher, so those two vastly different experiences are what I refer to as my writing apprenticeship!


3-Alex Morgan is not your prototypical protagonist.  What makes him different from other government agents?
First and foremost, Alex Morgan serves the world community. He and his compadres are international in every way, and that’s really important to me. Secondly, Morgan is not an assassin. That is not the role of Intrepid or the ethos of what General Davenport imbues. I read a review of one of my books recently where a reader felt that I should have killed off a baddie during a conversation. That’s not the way my stories work and it’s not what I want for my characters. If it was, they’d just be like every other action hero. I like to take the view that real life is a lot more complex and the simple solution to just shoot someone is more of a Hollywood affectation than reality.


4- Where did you come up with the idea for the Sword of Interpol?  And does this give you license to achieve a certain level of subterfuge that other agencies couldn't offer?
I really like this question. When I came up with the idea for Intrepid, I felt that Interpol was the perfect environment for it to belong to, because of the international relationship that exists between the member nations of Interpol. In terms of the Sword of Interpol, it is quite literally a play on Intrepid being the sharp end of what in reality is an intelligence co-operative. Being that sharp end, it fits nicely with the Interpol badge, which features the sword balancing the scales of justice. In relation to the subterfuge, given that Intrepid does not act in a single nation’s interest, then there is inherently international co-operation that facilitates Intrepid agents undertaking their covert missions with a great deal of behind-the-scenes support minus the petty jurisdictional distractions that usually abound in these kinds of stories. It means my agents can just get on with their missions and I think that’s pretty cool.


5- Where do you see the future of publishing heading and how will you fit into that paradigm?
At the moment I’m straddling the traditional /digital publishing divide, having started my journey hanging onto the coat-tails of the self-publishing revolution back in 2010. I’ve discovered some really cool things about the digital and social age – such as, by experimenting with what is called an ‘author platform’, building personal relationships with my readers, and working to create a cohesive look for my author brand – from books to online, media, events and beyond!


I know where my future lies – creating a full series of Alex Morgan thrillers as well as a separate Crime series that is in production, realising my aspirations for publication and circulation of the Intrepid series, building a strong team to partner with, and working through to when I can see Intrepid on the big and small screens! How the future of publishing will fit into that, I’m not sure, other than to say we’re game to take it all on and give any emerging trends a red hot go.
Posted by Gary Ponzo at 12:16 AM