Lee Goldberg's literary credits are way too numerous to list, but you can check out his Wikipedia page here.  He's an author, screenwriter and producer of over a hundred books, TV shows and/or movies.  And that figure may be low.  One of his many accomplishments is writing a popular series of novels based on the TV show Monk, which he also wrote for.

I found him to be very engaging and extremely thoughtful with his answers.  Thanks, Lee, for spending a few moments to play 5 questions with me. 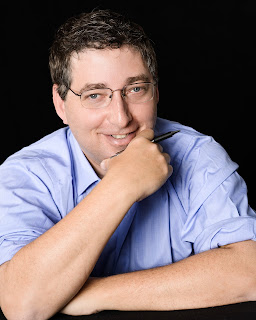 
A book is entirely my own and unaffected by production concerns or actors. I’m the actors, the director, the production designer… it’s entirely mine. It’s not a blueprint. It is the finished product and it won’t change much once I am done with it.  It’s not a group effort -- I plot it myself and I write it by myself. It’s entirely in my head and I live it for months.


Creatively speaking, there’s a big difference between writing prose and writing a script. In a book, you are seducing the reader. You are bringing them into your imagination and holding them there for as long as they’re reading the book. You construct everything. You construct the sets, the wardrobe, the world. You’re God. You can even read a character’s thoughts. In a script, everything that happens and everything the characters do has to be revealed through action and dialogue.


In a script, you could introduce a scene like this:


It’s a cheap Chinese restaurant with very few customers. There’s an aquarium with live lobsters, fish, etc. in the window. Monk is disgusted by what he sees...


But in a book, you have to describe the restaurant in detail. You have to tell us everything that’s going on. You have to set the scene for the reader. It’s an entirely different skill. That’s why some novelists are terrible screen writers and why some screen writers can’t write a book. They can’t jump back and forth.


The only thing that TV and books have in common is that both are mediums for sharing stories...in books, you tell stories, in TV you show them. That simple distinction is a difficult one for many writers to overcome when moving into one field from the other.


2- You've written such a variety of genres, do some of your readers get frustrated when they follow your work and read outside their realm of familiarity?


Not that I am aware of.


3- Update your publishing status right now.  Do you have traditional publishing deals and publish as an Indie as well? And do you approach the act of writing differently depending on the route you take?


No, I take exactly the same approach regardless of who is publishing my books. I simply write the best book that I can. I don’t worry about who is going to publish it – whether it will by me, one of Amazon’s imprints, or one of the Big Six. I’ve had great success self-publishing my out-of-print backlist, selling over 100,000 copies in the last two years, and just released a new novella, “Fast Track.” My crime novel “King City,” the first in a new series, was published last May by Amazon’s Thomas & Mercer imprint, and my on-going, bi-monthly “Dead Man” series is published by Amazon’s 47North imprint (in fact, my novel “The Dead Man #1: Face of Evil” was 47North’s very first title!).  William Rabkin and I co-created the “Dead Man” series and recruit novelists we know, or love to read, to write the books. Our authors include Christa Faust, Joel Goldman, “Star Trek” writer/producer Lisa Klink, Bill Crider, Aric Davis, Mel Odom, Anthony Neil Smith, and Emmy-award winning writer-producer Phoef Sutton (“Cheers,” “Boston Legal,” etc.) We’re up to 18 “Dead Man” books  so far with more coming. I’m also very much in bed with so-called traditional publishing. “Fox and O’Hare,” the new series I am co-writing with Janet Evanovich, premieres June 18th with the publication of “The Heist” from Random House. And, of course, my 15 “Monk” novels remain in print with Penguin/Putnam. I think it’s a big mistake for writers to limit themselves by being strictly “indie” or “big six.” I’m a writer first-and-foremost. I have written for big publishers and little publishers, movie studios and small production companies, major television networks and cable channels. Ultimately,  for me it just comes down to telling great stories, regardless of the medium or the distribution channel.


4-One of your latest projects is a short film titled, "Bumsicle," which has been invited to quite a few film festivals and has actually been nominated for awards.  It's extremely difficult to get into some of these prominent festivals.  Tell us about the film and your involvement?


“Bumsicle” is based on a short-story of mine that was published some years back Michael Bracken’s anthology “Fedora III.” It’s about a small-town detective investigating the death of a homeless woman who froze in a park. It’s a sequel of sorts to “Remaindered,” a short film I wrote & directed for Riverpark Center in Owensboro, Kentucky as part of their International Mystery Writers Festival. They approached me about making a short film as a teaching exercise for film students in several of their local colleges and universities. Riverpark and the schools would pay for everything, the only catch was that I had to use all local talent in front of, and behind, the camera and treat the set as a classroom. I jumped at the opportunity. Shooting “Remaindered” was a fantastic experience and the short film ended up screening in festivals all across the country. We had so much success with “Remaindered” that Riverpark asked me to do it again, which is how “Bumsicle” came about. What’s great is that the city and people of Owensboro really get behind the films, donating their time, energy and resources. Making the movies was great fun. The fact that we are getting some acclaim and attention for them is an added delight.  I hope we’ll do another one before the year is over.


5- You're scheduled to write a series of books with Janet Evanovich.  How did that come about, and how will you two work together?  One chapter per person, or will it be more integrated?


Janet and I have been good friends for many years. In fact, we’re both surprised that it didn’t occur to us long ago to write a book together! We have a very similar sense of humor. Once we came up with an idea for the book, things moved very fast. Random House snapped it up and we wrote the “The Heist,” in less than six months (it helps when there are two of you at the keyboard!). We are now deep into writing book #2. We plot together, trade drafts back and forth as we’re writing, and talk frequently throughout the process. We also get together at her place in Florida.
Posted by Gary Ponzo at 11:54 PM 1 comment: