A TOUCH OF DECEIT AUDIO BOOK PROMO IS HERE

Big announcement: A Touch of Deceit, the Audio Book is now available on Audible.com. The extremely popular R.C. Bray has done a fantastic job narrating the thriller. Since the first couple of weeks of sales are so important to its success, I will be offering a free autographed copy of the paperback version of the book ($11.47) to anyone who purchases the audio version of the book ($9.79) from Audible.com.
That's right, you'll receive $11.47 worth of value for just $9.79. I'm working on the honor system so just email me your address at gary@garyponzo.com once you've purchased the Audio Book and I'll mail you the paperback version. Maybe you have a friend or relative who might like the series but doesn't have an E-Reader? A Touch of Deceit makes a great gift. 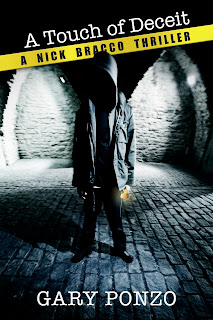 ARE INDIES RUINING THE PUBLISHING WORLD?

Let's face it, Indie writers have completely ruined the pool for all the other real authors to get properly paid for their work.  If it weren't for Indie's, readers would be paying $9.95 for every ebook no matter the title and people like Dan Brown wouldn't be forced to give away copies of the digital version of "The Da Vinci Code" for free.  Those bastards.
Digital publishing has sure effected the publishing world and Indies have used the one element they have to promote their work against the stalwart names in the industry.  Lower prices.  There was a time when Indies were the slutty sorority girl who showed up at a formal dinner to whispers of, "Who invited her?"  Things have changed for sure, but is this new craze going away?  Probably not.

Now, has the market been flooded by some marginal manuscripts which were thrown up on Amazon or B&N just because someone can do it?  Sure.  But if someone writes a good story, they'll receive the appropriate reviews.  And if someone doesn't . . . well, the opposite will happen.  I've never begrudged a traditionally published author for becoming successful the old-fashioned way.  As a matter of fact seventy-five percent of the books I read are traditionally published and I've interviewed many of them on this blog.  People like Tess Gerritsen and Janet Evanovich and Catherine Coulter just to name a few.  And they've been gracious and down-to-earth writers.  And I root for them to succeed.


But the publishing world is changing and we all need to adapt.  At least this is what my typewriter repairman tells me.  Especially now when so many traditionally published authors are deciding to publish independently as a choice.  It's hard to tell anymore whether someone is publishing a book by themselves because they want to or because they have to.
Don't forget, J.K. Rowling was rejected by twelve publishers before an eight-year-old daughter of a Bloomsbury editor insisted he read the entire book.  Louis L'Amour received 200 rejections before Bantam took a chance on him. Nowadays these authors could've published on their own and would've been Indie sensations.  Why?  Because they wrote good books and would've received good reviews and would've gone on to become very successful writers.


Are Indie's ruining the publishing world?  Doubtful.  Stay tuned, however, because the landscape is changing and opinions stated today may prove very archaic just months from now.  Which reminds me,  my blacksmith has been warning me about these mechanical horses which seem to be gaining in popularity.
Posted by Gary Ponzo at 9:22 AM 4 comments: