THE BOOKS THAT BROKE BOUNDARIES 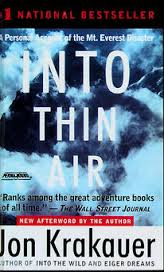 I’m a novelist so I read plenty of fiction, but some years ago I read a thrilling story by Jon Krakauer titled, “Into Thin Air,” about a journalist’s journey to the top of the world and it changed everything for me.  The  book was an exhilarating first-hand account of an expedition which attempted to scale Mount Everest and the  drama that’s included in achieving something so demanding.  Twelve people lost their lives on this particular expedition and Krakauer’s  storytelling is what brings this tragedy to life.  Without his incredible writing skills no one outside of the mountaineering community would even know about this disaster.

A storm is brewing while Krakauer looks down at the world from the top of Everest and miscalculations cause lives to be lost.  Krakauer works through some very guilt-ridden descriptions of mistakes he’d made and it gives the book a personal touch, as if he was using the forum as a form of catharsis.
I bring this up because it was the first nonfiction book I’d read for pleasure in a long while and it made me realize what good writing can do to a true story.  I’m sure this style of historical fiction was employed much earlier, however, this was the first book which captured my imagination so vividly. 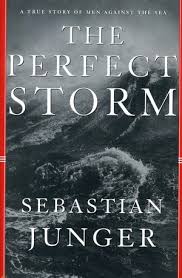 Not long after reading “Into Thin Air,” I read Sebastian Junger’s “The Perfect Storm.”  Once again I was transported into this amalgamation of three storm systems all merging in the North Atlantic to terrorize the six member crew of the swordfish boat, the Andrea Gail.  The crew was eminently qualified and by all accounts did everything humanly possible to escape their plight.  Junger does a stellar job of recreating the meteorological events that caused this perfect storm, even describing a Coast Guard rescue helicopter trying to save a civilian boat in the same system while navigating hundred foot waves.  This was a masterful job of storytelling and in less competent hands could’ve turned out to be a weather report.  But Junger draws you into the personal lives of the crew and their family and makes you feel the agony that goes along with the hazardous lifestyle of a deep sea fishing crew. 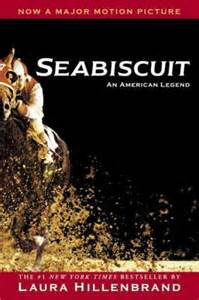 The final book in this trio of books that broke the boundaries for me was Laura Hillenbrand’s “Seabiscuit.”  Once again I was back in the 1930’s where horse racing and boxing were the two most popular sports.  Before telephones or television were household items, never mind handheld devices.  What Hillenbrand does so well is document the times and remind people what life was like all those years ago.  Can you imagine ten thousand people showing up at a train stop in New Mexico just to watch a horse lumber down a ramp and go to the bathroom?  It’s an amazing account of a lifestyle that is gone, and pending an apocalyptic event, will never return.

Now as a fiction writer, it’s my job to imagine that apocalyptic event and show you what that might look like.  But until then, these books allow you to see, smell and hear what history looked like, and when you’re finished you’ll think to yourself—wow, that really happened.

What were your boundary books?
Posted by Gary Ponzo at 3:01 PM No comments: