For many readers of the twelve NY Times bestselling authors who put together the Flight 12 series, it's been a year-long wait to find out exactly what happened to this missing flight.  I was honored to be chosen as the writer to finish this story with this Flight 12 thriller.

Nick Bracco is on board and I can promise that something is very wrong, but you'll have to stick around until the end before you find out what happened. 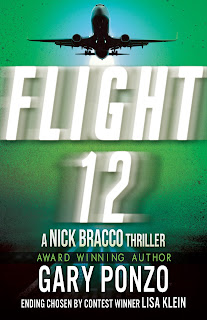 Does Nick save the flight?

You'll have to read it to find out.

For those who don't know, here's the setup:


May 12 New York (AP): A Skyway Airlines flight carrying 375 passengers and 13 crew bound for Rome’s Fiumicino airport from New York’s JFK International Airport has disappeared off the radar overnight according to airline spokespersons. Skyway Flight 12 had left New York at 12:00 midnight Monday evening and was said to be operating normally and in good weather conditions. According to sources on the ground, the plane, a Boeing 767, was piloted by an experienced flight crew who issued no alarm of any kind prior to vanishing somewhere over the Atlantic ocean east of Newfoundland. The 767 is
said to be a reliable twin engine carrier that’s been in service since 1982 with an excellent safety record. While a catastrophic mechanical failure is presently being investigated, says an FAA spokesman, a criminal event is not being ruled out. Both sea and air rescue crews have been dispatched from the US, Canada, Newfoundland, and Ireland. This is a developing story.

Fasten your safety belts. Return your seat backs and tray tables to their full upright and locked position. Review the safety information card in your seatback pocket once more before takeoff.

Posted by Gary Ponzo at 3:56 PM No comments: