To be honest, author Mike Ryan is a monster when it comes to producing thrillers.  He’s effective, efficient, and the most prolific writer I have ever known.  He’s married with four kids, three dogs and still manages to publish thrillers practically on a monthly basis.  You think I’m exaggerating, but I’m not.  I might even be underselling him.  His reviews on Amazon are incredible, so the volume does not diminish the quality of the work.  Some writers agonize over every word, but obviously for Ryan the words flow easily from his mind.  If you haven’t read his work, make it a point to check it out.  You won’t be disappointed.

Correct me if I’m wrong, but it seems that you’ve written at least 6 different series and at least 3 standalone novels.  I can’t possible count how many books you’ve written over the past decade.  Tell me about that very first book and what your original goals were.

Well my first books were written under a pen name, and I was basically all over the place. I wrote, I 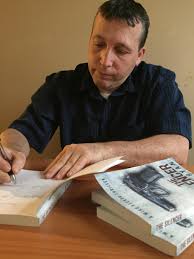 think, five or six books in, like, four genres. It wasn’t until about 2012 when I really got serious about things and I wrote The Cain Conspiracy. I started writing under my own name and focused on one genre, which is crime fiction/thrillers, which is what I love. I had a full-time job at that point, so my goal was basically just to make some extra money to make car payments, things like that. Obviously I’ve had some success since then, and now I’m a full-time author, but my original goal was just to write some things people would like and hopefully pay a bill or two every month.

2-     Obviously, you’re extremely prolific.  What is your writing schedule like?  With kids and pets and everyday distractions, how does it work?

We have four kids between 14 and 2, and three dogs, so we have a really busy house. Fortunately, my wife is a stay-at-home mom who takes care of a lot of things during the day, allowing me to get in a few hours of writing time. Some days are more challenging than others, and some days the kids are constantly barging into my office, but generally I get 3-4,000 words done every day, six days a week. It takes some time to get into a rhythm and figure out what schedule works best, but generally working in the middle of the day works best for me and is most productive.

3-     At what point during the Silencer series did you decide you would move on to the Eliminator?

I think it first was to just avoid burning out on the Silencer Series. I didn’t want to just write one series over and over and over, and then get so tired with the story and characters that I didn’t want to write them anymore. So I’ve found a good way to mix it up is to switch books. So I’ll usually write two books at once, so I’ll write the Silencer and Eliminator at once, then when I’m done with those, I’ll switch over to the Extractor and Brandon Hall books. I’ve found that’s a good way for me to stay fresh and not get tired of the characters, because I’m taking time away from them while I’m working on other things.

And another reason for switching up series is because I have so many ideas that if I waited until one series was done, I’d never get to everything I want to do. And I probably still won’t, because I have ideas for stories that I probably won’t get to for years because other things are ahead of them.

4-     What are the challenges with having so many protagonists swirling around in your head?  Are there similarities between Brett Jacobs and Mike Recker, or Luke Bridge etc? Do you make an effort to adjust their dialogue or any of their mannerisms?

I think they’re all pretty similar characters, but they do have differences. Bridge is more of the wise-ass, can make a joke at any point, where Jacobs is more straight-laced, with a dry sense of humor. Recker’s kind of the mix between the two. I do adjust their dialogue based on the situation and who they’re talking to. The biggest challenge with doing so many series at once is trying to remember, when you’re working on book 14, what you did back in book 2 so you don’t repeat it.

5-     You have a way of using dialogue to keep the reader informed and interested without getting overly descriptive.  It’s a very appealing recipe and your readers are extremely loyal.  How do you compartmentalize your time when it comes to corresponding with readers, marketing and writing?

Yeah, I use dialogue a lot, mostly because it’s what interests me the most. So I hope that  other people will like it too. I’m not a big description writer, and a lot of that is because when I read a lot of description in other books, I tend to skip it. Unless it’s crucial to a story, I tend not to describe what a desk or a window looks like. It just bores me. So I’m all about dialogue, story, moving things along, keeping things rolling at a good pace. That’s what interests me as a reader, so that’s what I try to provide as a writer too.

Before I start writing for the day, I’ll check my email, I’ll check my Facebook page, and I’ll  answer emails or respond to comments. And I respond to every single thing I get, no matter what it is. I answer. I let my readers and fans know I care about their comments, their opinions, their feelings, all of it. I don’t respond to trolls or hate mail or things like that, but everyone else, I respond to everything. Once that’s done, then I get my writing done.

When my writing’s done, then I focus on marketing, lining up book promotions, sales, ads, things like that. Or making sure other things are getting done, books formatted, audiobooks, all of that stuff. Then I’ll go back and check email or Facebook again, respond to any other readers comments and questions. I’ve had readers tell me they love how I interact with them and I don’t just post things and then never respond to anything. I’ll respond to everything.

Thanks for the questions! I enjoyed them.